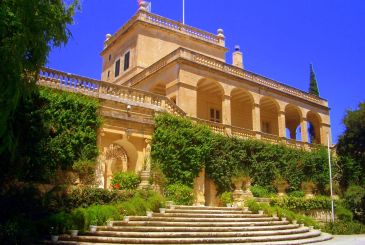 San Anton Palace, known officially as San Antonio, is a palace located in Attard, Malta. It is the official residence of the President of Malta, and is surrounded by both private and public gardens.

The San Anton Palace and its gardens owe their origin to the Knight Antoine de Paule, a French knight from the Langue de Provence, who was elected 54th Grand Master of the Order of St. John in 1623. As Grand Master, de Paule, who also founded Paola in 1626, acquired a sizeable plot of land near Attard and set about building a country villa which was nearer to Valletta than Verdala Palace.

He planned the villa on generous proportions so as to provide accommodation for his guests and for his large domestic staff which included cooks, food tasters, torch bearers, pantry boys, wig makers, a winder of the clocks, physicians, as well as a baker to make black bread for feeding his hunting dogs. The Grand Master named the villa ‘Sainte Antoine‘ after his patron saint, Anthony of Padua.

De Paule also provided the palace with a private chapel dedicated to the Madonna del Pilar with a vault decorated with the coats-of-arms of Grand Masters especially Emmanuel de Rohan-Polduc. De Paule also designed a symmetrical plan to the garden that consisted of more orange groves in the beginning. These oranges, he sent as gifts to those he desired to honour. A mausoleum dedicated to Grand Master de Paule may be found at St. John’s Co-Cathedral in Valletta in the Chapel of the Langue of Provence.

Successive Grand Masters were to use the place as their country-residence. After the French occupation of Malta and the Maltese rebellion, the Palace was the seat of the Maltese National Assembly from February 1799 to the departure of the French in September 1800. It was later to become the residence of the Governor and of the Governor-General of Malta. Since 1974 Sant’Anton Palace has been the Official residence of the President of Malta.