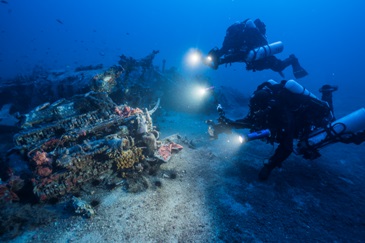 As a former British colony, the island of Malta had a pivotal role to play in the Second World War. Throughout the conflict it was the only Allied base between Gibraltar and Alexandria in Egypt, and it became a military and naval fortress. In 1940, the North African campaign increased its strategic importance and Malta became a prime target for the Axis bombers: the nations who fought against the Allies including Germany and Italy.

The Axis resolved to destroy Malta and starve its people by attacking ports, cities and the Allied convoys transporting cargo to the island. This became known as the Siege of Malta (and Second Siege of Malta), which took place between 1940 and 1943, eventually ending in victory for the Allies. Throughout the campaign, many ships and plans on both sides were destroyed. Much of this has been preserved in the archaeological record.

One such plane was JU88, which was discovered in 2009 outside of Salina Bay and sits at a depth of 55m. The Axis plane was shot down during the height of the second siege of Malta in 1943. During this period the Luftwaffe launched wave after wave of air raids using planes such as the Messerschmitt BF-109, the Junker’s dive bomber JU88 and the bomber JU88. However by this stage the Allies had built up their own indomitable defence system. Malta was now the base for 35½ squadrons consisting of over 600 modern fighters and bombers.

The JU88 wreckage is well preserved, with a tail broken off that lies a small distance from the same site. The cockpit still retains its forward-looking machine gun. The wreck probably ended up in the sea after being hit by flak over its target, or shot down during a dogfight (aerial battle).