The Feast of St. Helen is celebrated in the town of Birkirkara in Malta.

Highlights from the Programme 0f Events on the Occasion of the Solemn Feast in Honour of St. Helen Empress Augusta in the Collegiate Basilica of Birkirkara-2015

Monday 17th August
7.15pm: The Titular Statue of St Helen is taken out of its niche. There will be a band march by the Italian guest band, Montelepre Amadeus. Later, it will be joined by the Duke of Connaught’s Own Band and together they will play band marches along the main streets of town.

Friday 21st August, The Third day of the Triduum: Pastoral Operators’ Day
6.30pm, A Conventual Mass with Vespers will be said by The Provost, the Rev. Can. Fr. Vincenz Cachia.
8.30pm Band marches by St. Helen’s Band Club will entertain the public.

Saturday 22nd August The Eve of the Feast of St. Helen.
10.30am, there will be band marches along the streets of town by the Duke of Connaught’s Own Band.
6.15pm St. Gregory’s Band Club of Sliema will welcome Her Excellency, the President of Malta, Marie Louise Coleiro Preca with the Maltese National Anthem, after which it will play band marches around the town centre.
6.30pm.After the arrival of the V.I.P. guests, solemn Vespers will be sung with the participation of The Knights of The Equestrian Order of The Holy Sepulchre of Jerusalem.
7.45pm, St. Helen’s Band will also entertain the crowd with its band marches, ending its performance with an open air concert on the band stand in the Main Square.
10.00pm, Varied display of aerial fireworks
11.30pm, Ground fireworks display behind the Basislica

Sunday 23rd August, St. Helen’s Feastday.
8.00am: The Solemn Procession with the Titular Statue of St. Helen, led by The Provost Rev. Can.Vincent Cachia together with the Colleggiate Chapter and members of the confraternities. The Duke of Connaught’s Own Band Club will accompany the procession with a series of processional marches.
10.30am: Entrance of the procession back into the Basilica and the Solemn High Mass will start immedietaly, including the panygeric by Rev. Mario Attard OFM Cap.
7.00pm: Vespers
7.45pm: The Collegiate chapter leaves the Basilica towards the Domus Curialis on Main Street, where he will welcome H. E. Rev. Mons. Charles J.Scicluna, Archbishop of Malta and together they will head for the Basilica for the Solemn Vespers marking the feast’s closure.
12.30pm: There will be a band march along the streets by The St. Helena Band.
6.30pm: Band march by the St. Anthony Band
7.00pm: Band march by the Queen Victoria Band of Zurrieq. The two bands will meet eachother and accompany H.E. Archbishop Charles J. Scicluna towards the Basilica. The Queen Victoria Band will execute a musical programme on the band stand in the main square.
10.00pm: The Duke of Connaught’s Own Band will close the feast with a band march from the Main Square to the Band Club premises.
The Orchestra during the main events will be under the direction of Maestro di Cappella, Dir. Carmel Grech.

The Aula Capitularis Museum will be open to visitors on Saturday from 7.00pm to 9.00pm.

There will also be a series of fireworks displays throughout the week, with the grand final on Saturday night.

For more on Religious Feasts in Malta and Gozo, click here. 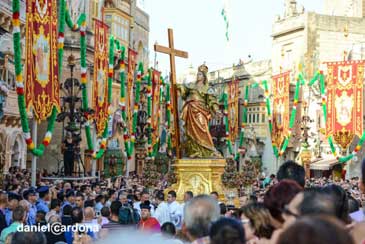