Maltese cuisine is the result of a long relationship between the Islanders and the many civilisations who occupied the Maltese Islands over the centuries. This marriage of tastes has given Malta an eclectic mix of Mediterranean cooking. Although the restaurant scene is a mix of speciality restaurants, there are many eateries that offer or specialise in local fare, serving their own versions of specialities.

Traditional Maltese food is rustic and based on the seasons. Look out for Lampuki Pie (fish pie), Rabbit Stew, Bragioli (beef olives), Kapunata, (Maltese version of ratatouille), and widow’s soup, which includes a small round of Gbejniet (sheep or goat’s cheese). On most food shop counters, you’ll see Bigilla, a thick pate of broad beans with garlic. The snacks that must be tried are ‘hobz biz-zejt’ (round of bread dipped in olive oil, rubbed with ripe tomatoes and filled with a mix of tuna, onion, garlic, tomatoes and capers) andpastizzi (flaky pastry parcel filled with ricotta or mushy peas).

A trip to the Marsaxlokk fish market on Sunday morning will show you just how varied the fish catch is in Maltese waters. When fish is in abundance, you’ll find Aljotta (fish soup). Depending on the season, you’ll see spnotta(bass), dott (stone fish), cerna (grouper),dentici (dentex), sargu (white bream) and trill(red mullet). swordfish and tuna follow later in the season, around early to late autumn, followed by the famed lampuka, or dolphin fish. Octopus and squid are very often used to make some rich stews and pasta sauces. 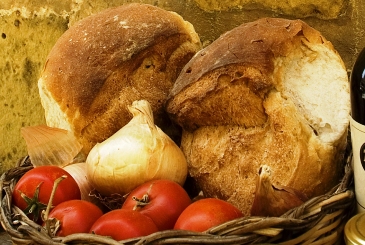 Malta may not be renowned like its larger Mediterranean neighbours for wine production, but Maltese vintages are more than holding their own at international competitions, winning several accolades in France, Italy and further afield. International grape varieties grown on the Islands include Cabernet Sauvignon, Merlot, Syrah, Grenache, Sauvignon Blanc, Chardonnay, Carignan, Chenin Blanc and Moscato. The indigenous varieties are Gellewza and Ghirghentina, which are producing some excellent wines of distinct body and flavour.

The main wineries organise guided tours and tastings. Depending on the season, tours cover the entire production, from the initial fermentation through to the ageing process. They also include wine history museums and opportunities to taste and buy a variety of vintages.