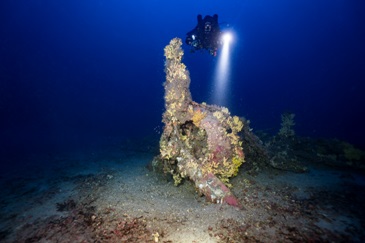 The Fairey Swordfish was a biplane that punched well above its weight. Originally designed in the 1930s, the “Stringbag” was operated by both the RAF and Fleet Air Arm of the Royal Navy. By the outbreak of the Second World War, the Fairey Swordfish was considered rather obsolete, yet it still played an important role during the conflict. In 1941, 16 Fairey Swordfish biplanes were launched from the aircraft carrier HMS Ark Royal. They were responsible for crippling the Bismarck, the first of two Bismarck-class battleships built for Nazi Germany’s Kriegsmarine.

The Fairey Swordfish biplanes were also utilised in Malta. In fact, by the end of the war, they had caused more damage to Axis shipping than any other Allied Aircraft. This particular plane was forced to ditch into the sea in April 1934 due to engine failure, and was discovered at outside of St Julian’s Bay in 2017. Fortunately for the pilot, he was picked up and rescued by off-duty men from the Royal Air Force air sea rescue service, who just happened to be sailing for pleasure on a 27-foot boat from the RAF Kalafrana sailing club.

The wreckage lies at a depth of 65m and the skeleton of the plane remains, along with its engine, propeller and cowling (the covering for the biplane’s engine), which have all survived intact. She lies on an otherwise sterile seabed and this attracts a nice variety of sealife.