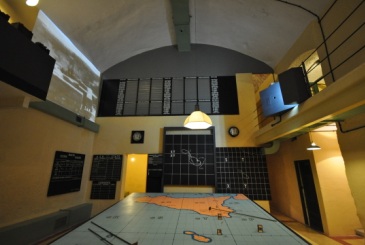 The Lascaris War Rooms consist of an underground complex of tunnels and chambers that housed the War Headquarters from where the defence of Malta was conducted during the Second World War.

This secret complex contained operations rooms for each of the fighting services from where not only the air defence of Malta was coordinated, but also some of the greatest battles fought in the Mediterranean during the war. Lascaris was the advance Allied HQ from where General Eisenhower and his Supreme Commanders Admiral Cunningham, Field Marshal Montgomery and Air Marshal Tedder directed Operation Husky – the Invasion of Sicily in 1943.

In the Post War years it became the Headquarters of the Royal Navy’s Mediterranean Fleet. Later, in the late 1960s, it was taken over by NATO to be used as a strategic Communication Centre.

In 2009, Fondazzjoni Wirt Artna – the Malta Heritage Trust – undertook the challenging task of restoring this historic complex. As a result of this work visitors can explore and enjoy one of Malta’s best kept wartime secrets.