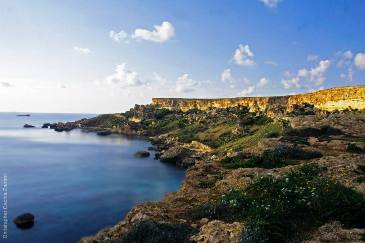 The Majjistral Park is situated in the middle of the Natura 2000 stretch of coast, in an area largely dominated by clay, which sits beneath the upper and lower coralline limestone.

The wave action has eroded the clay to the point where large sections of limestone have collapsed, forming the boulder scree. This has given rise to a special habitat for flora, which has often remained somewhat protected owing to its relative inaccessibility. It has also created a breathtaking landscape which does not go unnoticed by most visitors, both local and foreign. The erosion of the rock has also lead to the formation of sand which in turn is washed ashore to create sandy beaches. The North West in fact boasts a number of beautiful bays, stretching from Fomm ir-Rih, to Gnejna, Ghajn Tuffieha, Golden Sands, and Paradise Bay. These are all surrounded by magnificent views of clay slopes, boulder scree and cliffs. The outstanding landscape in the park has attracted a number of ramblers over the years. While visitors flock to the beaches, like Golden Sands in the hot months in order to cool down, the shoulder months between October and April bring the landscape to life with the onset of the Autumn rains. The climate is mild and perfect for walks in the Park. Various features of cultural interest that merit conservation lie within the boundaries of the Park. These features include cart-ruts, long rubble walls (dry stone walls), farmhouses, small beehives, tombs dating to the Classical period, natural caves, and numerous corbelled stone huts (giren) which lie within and outside the Park. Of particular interest is a rare corbelled hut constructed in a square shape. Rural corbelled huts were used for both storage and shelter. There are also notable remains of British military architecture in the area, mainly dating to the early 20th century. Two large sets of military barracks used during the British period lie just outside the confines of the Park, which were used for military exercises and training. A military shooting range also exists with the Park. There is a camouflaged second World War pillbox near the Manikata area, and another in the Ghajn Znuber area. During the first World War, wounded soldiers from the Battle of the Dardanelles (Battle of Gallipoli) were brought to a large hospital camp erected in this area. Remains of cart-ruts (grooves cut or worn into the natural rock), ancient stone quarries and megalithic walls lie behind the interesting modern church of Manikata, built in the early 1970s by the architect Richard England. Bronze-age cart-ruts also exist in others areas of the Xaghra l-Hamra plateau. On the two sides of the valley overlooking Golden Bay (ir-Ramla tal-Mixquqa), there are entrenchments built as part of a coastal defence system during the period of the Knights of St. John, in the early eighteenth century.