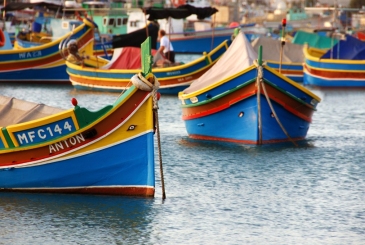 Marsaxlokk Bay is Malta’s second largest natural harbour. It is the best place to see the colourful, traditional Maltese fishing boats, the Luzzus, with the mythical eye painted on their prows.

The village is the Islands’ main fishing harbour; its Sunday fish market a fascinating insight into local life and a traditional industry. The stalls brim with the night’s catch – fish of all shapes, colours and sizes. The village itself has many good fish restaurants. Marsaxlokk derives its name from the Arabic word marsa, meaning harbour, and Maltese for the south-easterly Mediterranean wind, the Xlokk (Sirocco in Italian). Marsaxlokk, with its sheltered habour, was an easy landing place for pirates and the Ottoman Turks. It was here that the Ottoman Turks landed for an attack which ended in the Great Siege of 1565. Napoleon’s army landed here in 1798; and in recent times, the harbour was the scene of the Bush-Gorbachev Summit,1989.

The headland to the left of the Bay is Delimara Point. It has two attractive, secluded rocky inlets suitable for swimming: Peter’s Pool; and the furthermost part of the headland. Fort Delimara, on the west of the peninsula, was built by the British in 1881 to guard the entrance to Marsaxlokk Bay.