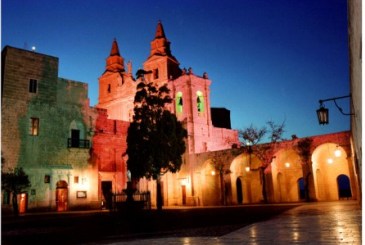 Mellieħa was once an isolated 15th century hamlet perched on the ridge overlooking Għadira Bay.

It was abandoned for a couple of centuries because of its vulnerability to pirate and Saracen attack. Re-inhabited in the early 18th century, it has since developed into a flourishing town though it retains a quaint historic centre with narrow streets and stepped alleys. From the terrace of the Parish Church, there is a panoramic view over Mellieħa Bay and the surrounding countryside.

Beneath the church is the Chapel of the Blessed Virgin, a national shrine. A fresco of the Madonna and Child is said to have been painted by St. Luke. This legend has made the troglodyte chapel into a popular place of pilgrimage. The walls are lined with ex-voto offerings and paintings – a testimony to the devotion of the people.

Mellieħa today is a modern town noted for its large private villas and houses which have been built on land overlooking the bay. While the town has developed into a resort, it has managed to retain some of its rural character.