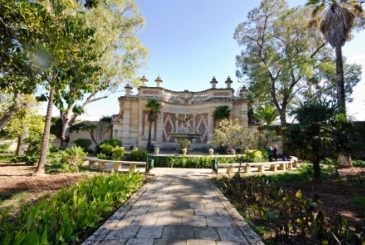 Probably the best known of the Islands’ gardens, San Anton Gardens was laid out by Grand Master Antoine de Paule as grounds to his summer residence, San Anton Palace.

From 1802 until 1964, San Anton Palace was the official residence of the British Governor, after which it remained a state building and is now the residence of the Maltese President. Various heads of state have visited the gardens over the years and numerous plaques mark their ceremonial tree planting. The garden is a botanical delight with mature trees, old stone urns, fountains, ponds and formal flower beds. The garden is formal with rustic touches and holds a wide variety of plants and flowers, such as Jacaranda trees, Norfolk Pines, Bougainvillea and roses.

Nowadays, the garden is the Annual Horticultural Show venue and during summer, the spacious central court becomes an open-air theatre for drama and musical performances.