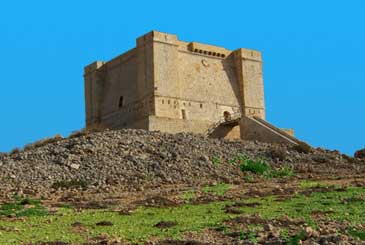 The Santa Marija Tower on Comino formed part of the early system of towers which the Order set up to facilitate defence and communication between the Ċittadella in Gozo and Mdina. It later became a key location of the system of towers built along the coast. The decision to build this Tower was taken by Grand Master Alof de Wignacourt in 1618, and was financed by the Grand Master himself, by the sale of the brushwood on the island and from the profits made by the resettled farmers. The site chosen was some eighty metres above sea level.