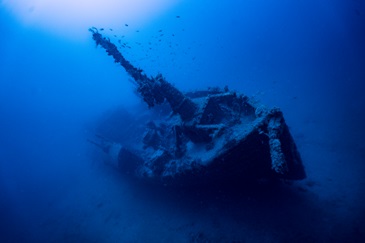 HMD Trusty Star was a naval drifter built in 1919 by Ouse Shipbuilding for British Royal Navy. The steel vessel was about 26 m in length with a beam of 5.5 m and had a triple expansion steam engine. Her original name was HMT Groundswell; she was later renamed FV Elie Ness when used in fishing industry in Scotland. Requisitioned by Admiralty in 1939, she was renamed HMD Trusty Star and converted to a minesweeper.

On the night of the 15-16th February, 1941 the Luftwaffe laid magnetic and acoustic mines by parachute in the Grand Habour and Marsamxett. On 9th April, the drifter ” Trusty Star “was fitted with the proper equipment for sweeping magnetic mines, the LL cable towed behind the ship and supplied with electrical pulses. She had great success during April to keep the harbour open in spite of heavy mine-laying operations by the Luftwaffe. On April 30th 1941, Abingdon was damaged when she put up an acoustic mine and the Trusty Star was mined and sunk in the Grand Habour. In early September 1941, Trusty Star was back in service after being salvaged, and put back in the mine-sweeping force. On the night of 12th – 13th May 1942, minesweeper Beryl and Trusty Star were working outside the breakwater when they were missed by three torpedoes fired at them by the e-boats escorting mines layers.

On 10th June 1942, Trusty Star was clearing mines laid by German S-boats outside Grand Harbour when she hit a mine herself and sank about 3 km off Fort St. Elmo in Valletta. Only one Maltese seaman was injured, and the rest of the crew were rescued unhurt.