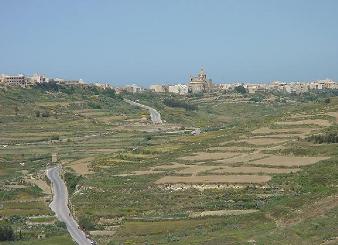 This picturesque village, perched on one of Gozo’s highest hills, offers spectacular sea views and panoramas over the Island with some of the best views of Ċittadella.

In centuries past, olive trees were cultivated on the hills where the village stands. Its name, meaning olives, recalls the fact. Żebbuġ is an ancient village. It became a parish in 1688 and its baroque church dates from 1736. As is typical of many Gozitan villages, the streets in the centre are narrow and winding. Żebbuġ is noted for a special marble quarried nearby: the material is similar in colour to alabaster and is rare because of its limited supply.

Today, the village has expanded and become a popular holiday destination for both Maltese and overseas’ visitors because it offers spectacular panoramic views. A steep and scenic road leads downhill to the coastline below at Qbajjar Bay and on to the resort town of Marsalforn.

Żebbuġ (Gozo) was one of the localities included in the first set of itineraries and maps developed for this project.