The Calabrian, Mattia Preti (1613-99), is the artist most associated with adorning the baroque churches of Malta. He painted the vaulted ceiling in the Co-Cathedral of St. John in Valletta which depicts the life of St. John, as well as numerous altarpieces and works for parish churches across the Islands. His work on the vault of St. John’s took some five years to complete. Other fine Preti works are in the National Museum of Fine Arts, Valletta.

Preti was in Malta some 30 years during which time he was admitted to the Order. He became known as ‘Il Cavalier Calabrese’. Preti was more than an artist: he was also responsible for the magnificent baroque interior of St. John’s. The intricate stone-carved walls are made up of Maltese crosses, coats of arms, gilded flowers and other insignia and symbols. He also painted several of the altarpieces in the side chapels.

Other works by Preti are found in parish churches across the Islands. Look out for his works in the Church of St. Lawrence, Vittoriosa. 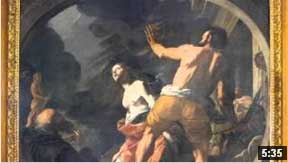