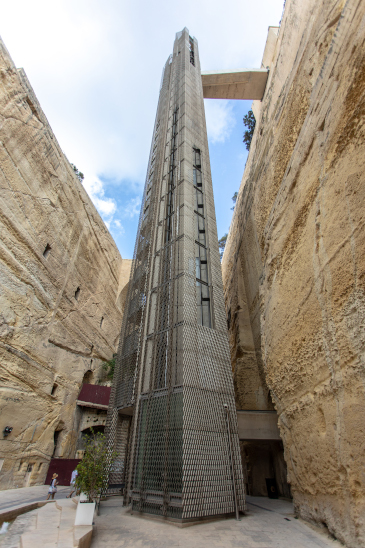 The Upper Barrakka lifts opened in December 2012, linking the Grand Harbour to the Upper Barrakka Gardens and Valletta city centre. It is located on the original site where its predecessor, which was dismantled in 1983, operated between 1905 and 1973.

There are two lifts, which are 58 metres high, and can carry twenty-one people at a time. The journey takes around twenty-five seconds, making it the quickest way into the city from the Valletta Waterfront.

The lifts offer a practical alternative for the thousands of cruise ship passengers who disembark at the Valletta Passenger Terminal to reach the city with its shops, restaurants, churches and museums. It is also possible to combine the ticket for the lift with the ferry crossing across the Grand Harbour to or from The Three Cities.

The ticket is only free for seniors holding a ‘Maltese Karta Anzjan’.