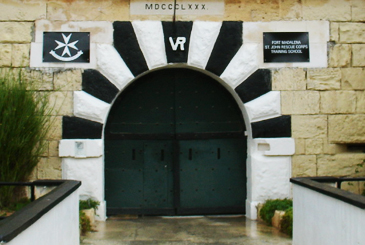 Fort Madalena is a fortress built during the Reign of Queen Victoria and forms part of massive defence lines. The fort was built in two phases, the first was the pentagonal shaped fort built as part of the Victoria Lines defences [1878-1880], and the second was the addition of a 9.2 inch coastal defence battery. The 9.2 inch battery was added to the seaward side of the Fort.

Fort Madalena was later occupied by the Royal Air Force and used as a communications post. The buildings added on top of the original Fort structure are evidence of this era. The Fort is now the Head Quarters and Training School of the St John Rescue Corps and regular exercises are conducted at the Fort.

The original Fort is relatively small, the short sides of the pentagon are approximately 30 metres long and surrounded by a ditch about 6 metres deep and 4 metres across. The additional section on the seaward side used to mount two 9.2 inch coastal defence guns and the original mountings can still be seen, as can the magazine. The Fort is approached via a narrow passage through the scarp and then across a narrow bridge. The ditch is defended by elaborate counter-scarp galleries.

Fort Madalena is the property of the Government of Malta and falls under the responsibility of the Armed Forces of Malta.

The St. John Rescue Corps is a voluntary organization under the auspices of the Most Venerable Order of the Hospital of St. John of Jerusalem. It operates as a volunteer civil protection and humanitarian organization, and is called out alongside the Civil Protection Department in Malta in emergencies and for search and rescue operations. Volunteer members of the St. John Rescue Corps respond to these incidents and receive no remuneration.

The Fort is regularly open to visitors on Saturday afternoons between 14.30 hours to 16.30 hours and during the week by appointment. Although there is no fixed Entrance Fee for individuals turning up to visit the Fort, donations are accepted which assist in the maintenance of the Fort. Appointments can be made either by phoning Mr. Andrew Pizzuto on cell phone 79283333 or by sending an email to [email protected]