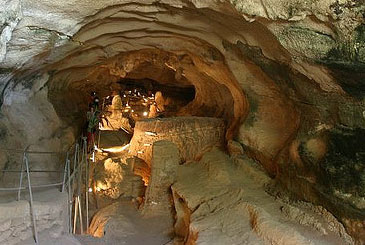 Ghar Dalam Cave is a highly important site as it was here that the earliest evidence of human settlement on Malta, some 7,400 years ago, was discovered.

The display area consists of two parts: the cave and the museum, which exhibits a remarkable wealth of finds from animal bones to human artefacts. An overlaying river running at right angles formed the cave. It is some 144 metres deep, but only the first fifty metres are open to visitors. The lowermost layers, more than 500,000 years old, contained the fossil bones of dwarf elephants, hippopotami, micro-mammals and birds. Above the pebble layer that follows is the so-called ‘deer’ layer, dated to around 18,000 years ago. The top layer dates to less than 10,000 years and holds evidence of the first humans on the Island.