One of the joys of being on The Maltese Islands is that, no matter where you are, you’re never far from one of the many magnificent beaches or secluded little coves. 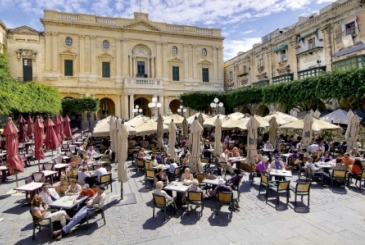 The Maltese coastal waters are generally clean and safe for swimming as there are no tides and the sea temperature averages around 22.8C in summer. Annual rainfall is low, averaging 578mm a year and the length of the dry season in summer is even longer than in neighbouring Italy.

Malta’s climate is strongly influenced by the sea so the Islands have a very sunny climate with a daily average of more than twelve hours of sunshine in summer and five to six hours in mid-winter.

Summers are hot but often mitigated by cooling sea breezes. June is the ideal time of year to come for sun and sea as the summer season is just getting into full swing and it’s not too hot. July through September are the peak summer months (temperature average: 30C/86F) while August is the hottest and busiest month of summer (average temperature: 40C/104F).

Swimming is possible well in to the Autumn months and the peak beach season can last until mid to late October, which is a great time to visit as the temperatures are bearable, the sun still shines, but the Islands are less populated and more serene.

Spring is a season full of surprises; a touch of rain, some beautiful crisp days and others that are perfect for spending on the beach.

Although Winters are mild, swimming from November to February is not recommended as the water and air tends to be quite fresh, especially when north or north-easterly winds blow from central Europe.