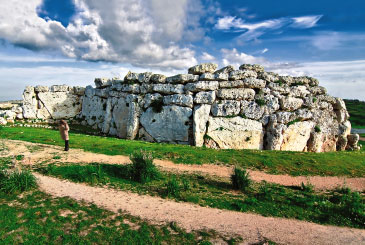 GGgantija Temples are one of the most important archaeological sites in the world and date from around 3600 to 3200 BC.

Due to the gigantic dimensions of the megaliths, locals believed that the temples were the work of giants. This particular temple site in Gozo bears witness to this ancient legend: its name, Ggantija, is Maltese for giant.

The Ggantija megalithic complex consists of two temples surrounded by a massive common boundary wall, which was built using the alternating header and stretcher technique, with some of the megaliths exceeding five metres in length and weighing over fifty tons.